Resurrection of the Presumpscot 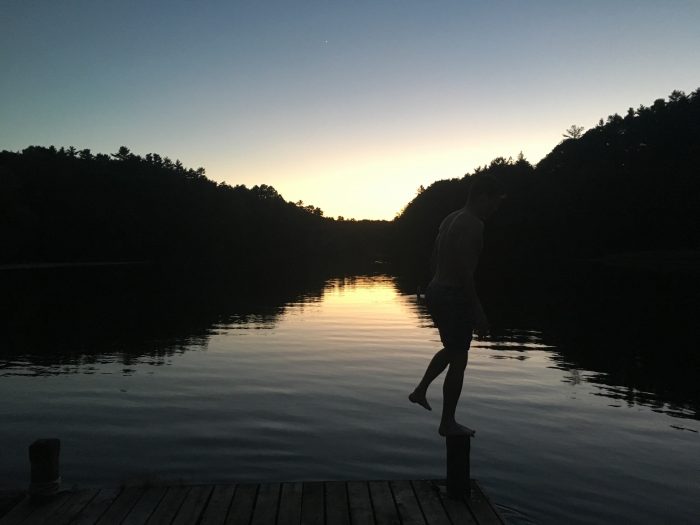 Liam and I never gave our game a name, so I just call it the “Post game.” For five straight summers, from our senior year in high school through all four years in college, Liam and I would begin each day on the Presumpscot River with this ritual exercise.

The game’s beauty is in its simplicity. Liam and I would balance on one foot on opposing posts on the dock. Whoever fell into the water first, lost.

Truthfully, we made the game to force us into the cold water. But for me, it also had a foremost purpose. The Post game was a distinct gate in my day– it separated my normal life, its concerns and responsibilities, from the escape I could only find with my friend on our river.

Summer days spent on the Presumpscot with Liam were some of the happiest of my life. We’d meet everyday after our summer jobs to skip rocks, skate across the mudflats, and float downstream on our backs while watching the sun set over the treetops. The wildlife was inspiring. We caught burrowing clams with our hands on the mudflats. Bald eagles and osprey would fight in the sky for fresh alewife catches. Now and then, a curious seal would even wander up from the bay to swim with us.

One of the reasons I care so much about my river is because I realize that it let me develop one of my closest friendships. Without the setting of the Presumpscot– the cool water to swim in, the rocks to skip, the wildlife to interact with– I’m sure I wouldn’t have become as close friends with Liam as I did. Our mutual love for the murky waters of the Presumpscot carries our friendship even today.

Just last month, I spoke with another former resident of the Presumpscot. He too grew up along its banks, but told a far different story from mine. When he was a teen, the river was so polluted, very few could even tolerate the stench of living near it– the proposition of swimming in it was laughable.

His story confirmed what I had already discovered a few years ago when writing a paper about the history of the river in college. In fact, the Presumpscot had effectively been a wasteland all the way from the mid-1700s, when the first paper mill in Maine was constructed on its banks, until the 1970s, after the Clean Water Act was passed. The river has a deeply scarred history of extensive damming, pollution, extinction, and ultimately, death. In 1965, the Maine Department of Wildlife declared my section of the lower river, “dead,” due to the extinction of all wildlife, a dissolved oxygen level of 0.00ppm, and a flurry of toxic carcinogens that had settled into the mud that Liam and I would spend our summer days sliding on fifty years later.*

To me, growing up on the Presumpscot was one of the greatest privileges I was ever given in my life. I’d like to thank all of the people that are a part of national organizations like American Rivers and local groups like Friends of the Presumpscot for making my childhood on the river possible. I hope one day I too can give back to ensure the next generation is given the same privileges that I was.

In August of last year, National Geographic published an article about the Presumpscot and how recent removal of dams have allowed for a remarkable comeback of huge alewife runs that used to be commonplace in the lower section of the river. These alewives act as a keystone species that powers the whole ecosystem of the Gulf of Maine, and they even play heavily into the local economy, as lobstermen use them as bait for traps. In 1650, a settler described how these alewife runs used to look when he wrote, “the entire surface of the river, for a foot deep, was all fish.” It is immensely exciting for me to see the start of a comeback to that original ecosystem state and it’s a true inspiration to see all of the work that locals have put towards removing those dams finally pay off. I can’t wait to see what the future holds for the Presumpscot.

Notes
*My favorite account of the Presumpscot from the mid-1900s was from a local resident, who told me that the river looked like a “rootbeer float:” its dark brown, polluted waters were covered by a thick foot deep layer of foam that floated atop the water’s surface. The foam was created from the toxic chemicals dumped into the river from the upstream Sappi Paper Mill. The foul-stenched foam was also so acidic that when the wind carried it off the river to neighboring homes, it would peel the paint right off of their houses or leave them a nasty dark green or black color.

Previous
Support the protection of 5,000 new miles of wild and scenic rivers
Sign the Petition