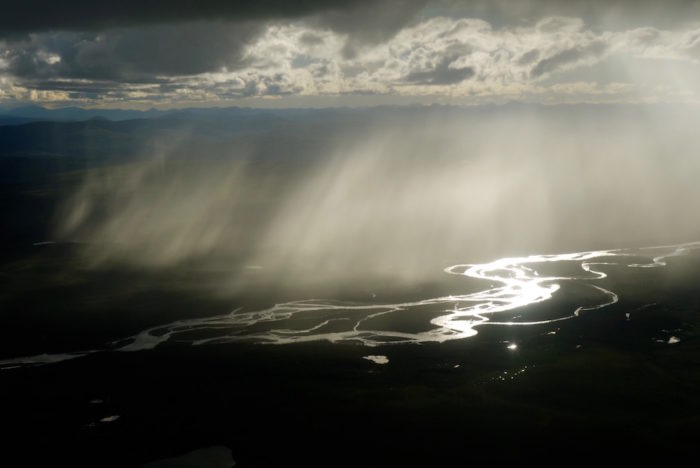 Alaska has 365,000 miles of waterways, from cascading mountain streams to meandering valley rivers, from the meltwaters of glaciers to broad rivers that empty into the sea. By definition, there are hundreds of rivers that qualify as for Wild & Scenic River status but decades of an Alaskan Congressional delegation and U.S. Congress unfriendly to wilderness has resulted in less than 1% of the state’s river miles being designated as Wild & Scenic Rivers. One day, I hope this will change. Connection to wild places is essential to me, and the freedom to explore these places. I’ve had the pleasure and good fortune to paddle on many of Alaska’s rivers. My favorite wilderness is the Arctic National Wildlife Refuge. This refuge alone has 160 truly wild rivers, yet only two (!) are designated W&S rivers. One of my favorites (that deserves special protection) is the Hulahula. Paddling down the river I’ve marveled at the dramatic peaks of Mts. Chamberlin and Michelson towering above the river, while dodging boulders through whitewater. I’ve encountered wolverines, wolves, muskoxen, grizzly bears, Dall sheep, and tens of thousands of caribou. The river crosses every northern ecosystem, from the Brooks Range peaks and foothills, the coastal plain, to the coastal dunes and river delta, where thousands of seabirds nest and feed, and polar bears patrol the offshore barrier islands. We need wild rivers for our survival.