Terror on the Lochsa, Well Maybe not Terror but we were Pretty Scared 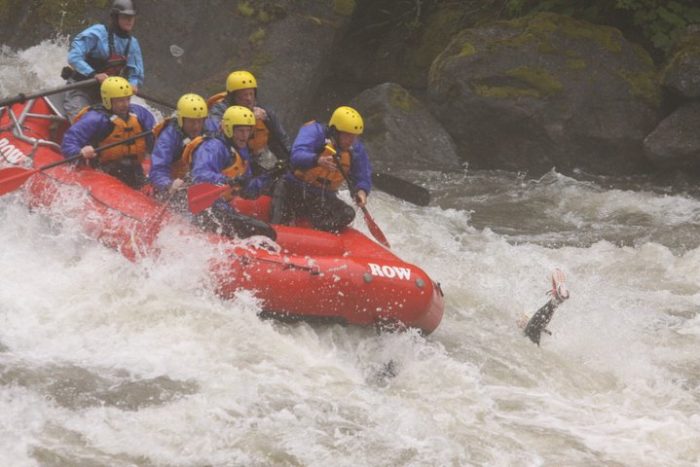 I and my three buddies decided to take on the Lochsa River in June 2011. One of the guys had gone the previous year with his family and had a great time, with a few stories that enticed the rest of us to go for a few days with a short backpacking trip up the Selway River trail planned for afterwards.

We arrived in the evening prior to our run down the river at the confluence of the Lochsa and the Selway , a perfect spot for our comfortable accommodations. We got a good  night’s sleep and were ready for our adventure in the morning. The day started with the usual safety briefing from the guide company and the picking out of the rafting attire, which included wetsuit, splash top, fleece cap, helmet, and everything you should be wearing to handle submersion in water that had been snow just an hour before. The usual safety briefing turned ominous when the guide said that due to the super wet winter the flow of the river was 21,300 cfs and they had never run the river that high and didn’t know what would happen with the rafts. Furthermore he said that if we wanted our money back they were ok with that. So, looking at my friends and trying to decipher whether the guy was messing with us or serious we all just stood there quietly with no one wanting to be the first to bail.

The silence continued as we rode the 11 miles up river in the old used school bus, as we watched telephone pole sized trees bombard down the river, nothing stopping them. I looked at by buddies, no one was joking around, so unlike them. No smiles for something we were thinking was going to be so “fun”.

We got to the put in and readied for the trip down the rushing river and the rapids with names of Grim Reaper, Lochsa Falls and Picking up the Pieces. Those who pray prayed. Those who didn’t wet themselves prematurely and took their seats, no backing down now. Long story short, the trip down was a white knuckle unforgettable ride, thanks to those “steering” or trying to and wouldn’t you know it we are all still around to tell the tale…and we went again the next day. No flipped boats and only three ejections.