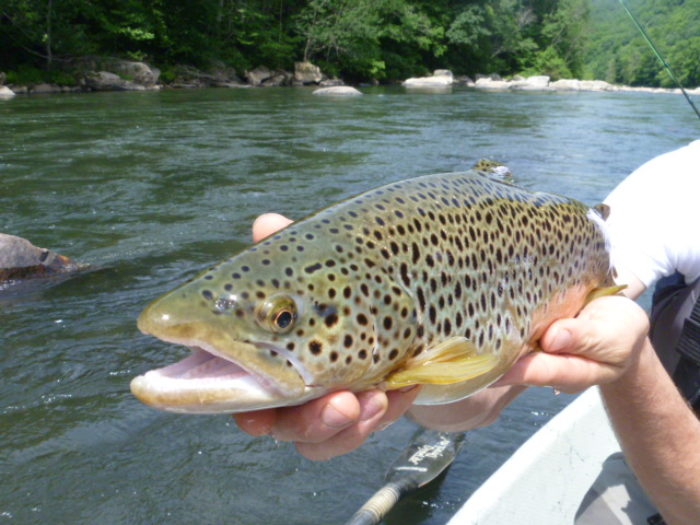 The chirping of the cicada song got louder and louder as we drove down into the Laurel Highlands valley. This time around, Father Time would smile upon us once again with an epic trip on the Youghiogheny River.

We planned the trip perfectly, or so we hoped. The cicadas should be slapping the water with the trout aggressively responding. Signs of cicadas approaching the north were evident in WV and southern Ohio. It was only a matter of time before they arrived on the Yough near the PA border where we would put in below the Confluence. Having tied up more than a dozen cicada patterns, I filled up two Altoid boxfuls and had prepared for the event like a kid waiting for sands of summer.

We began the float by nymphing, hoping the cicadas would come out and play. As we drifted by the low lying areas, we could hear sections of cicada static humming in an encouraging way. We tried the variety of cicadas on the surface, both big and small with no luck. By lunchtime, the cicadas still didn’t make their presence known on the water to the fish, but the Slate Drakes emerged as we had some alternate surface action. Still, we enjoyed the day, hooked fish, ate hoagies, and remained patiently for the cicada action.

I pointed out one lone cicada fluttering in an eddy, the first we observed on the water. We rowed over and sat there for a bit to watch it struggling in the water’s film. Its wings spread out fully, twitching and jerking, though the orange and black bug was not eaten. I leaned over, allowed the bug to crawl up on my hand. Making note of its glowing red eyes, I pulled out one of my patterns to match. It took off in the wind and headed for the trees. There was still time for these cicadas to start flying, but we were running out of time.

We floated cicadas all afternoon in slow eddies and fast runs, not one trout came up to investigate. By late afternoon, lines like, “You shoulda been here yesterday!” and “Maybe they’ll be here tomorrow!” snuck into our brains like so many other mistimed fishing adventures. I recalled the time we tried for the Green Drakes and actually observed the females swarming overhead, never to mate with the males and drop. Or the time we tried to hit the reds on the Kenai in Alaska and missed them by mere days. This would be another footnote in the long line of missed hatches and misjudged trips.

Three quarters of the way through the float, the sun sunk between the hills, the coolness of the river air swooped in, and the cicada static died off a bit. We knew that it would have to be another day, time which we didn’t have to fish. Silence fell upon the valley.

From the back of the boat, with his own ideal timing, my buddy murmured, “Remember last summer we hit the Tricos on the Big Hole River? That was crazy.” How could I forget? We had the river to ourselves with pods of trout responding to every cast of our spinner imitations; the big ones ever so subtly slurping our patterns and leaving us with jaws wide open.

“Yep, you caught that monster brown at the take-out.” I still owed him a fishing shirt for the last-cast bet.

Then the memory floodgates opened to the past outstanding trips we encountered. On the Green River in Utah, the caddis were so thick the fish gulped mouthfuls. Or our trip to the Madison, when we thought we missed the salmon flies, but they just happened to still be hunting below Quake Lake. Or the trek down through the Powder River canyon in Wyoming. The cutties took every bug we offered.

So no, it wasn’t the momentously timed trip that we had wished for, but the micro-moments themselves were perfect: watching the bald eagle battling the mergansers and her babies for space on the river, observing the Slate Drakes and stoneflies buzzing overhead, laughing at the beefy brown that nearly pulled my rod in. These are the moments in time we would remember that day.

Often, the snapshots in time of our adventures display us holding that final reward, but it’s the moments in between which make a rewarding time on the river and bring us back for new opportunities.