When a Wild & Scenic River is also an International Border 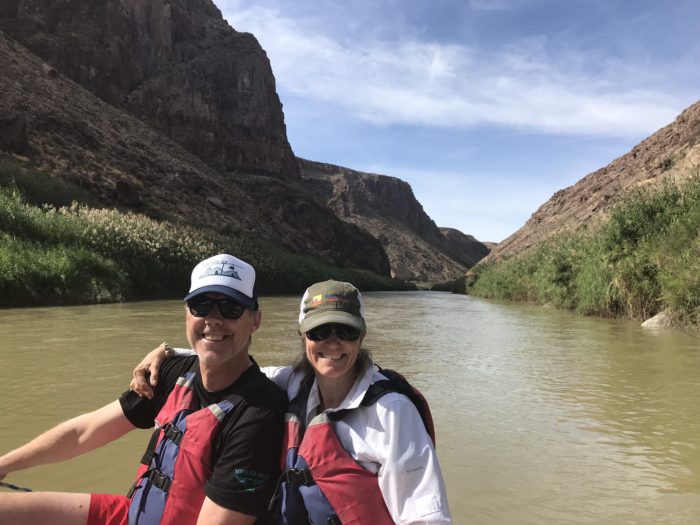 Over Thanksgiving 2017, my husband and I drove 2700 miles RT from our home near the confluence of the Colorado and Roaring Fork Rivers to Big Bend National Park and the Rio Grande River. A bucket list item for years, we were finally able to make this unforgettable camp-along-the-way mecca to experience a vast rugged landscape defined by high desert buttes, a fragile and politicized international border, and a remarkable river that virtually disappears from overuse and pollution by the time it reaches El Paso before coming back to life as it enters Big Bend State Park and continues on through and beyond similarly named Big Bend National Park.

The lower tributaries that refuel the river were pumping more CFS in late November than average due to the active hurricane season that had devastated Houston, Puerto Rico, and other places still struggling to recover. We spent several days in the NP proper, and made a point to float Colorado Canyon which did not disappoint. At no moment along the ~20 mile journey was it possible to forget that Mexico is river right and the USA is river left.

At one point we heard a gunshot from high above the Yucca, Tamarisk, and other non-native plants (nearly all trees had been clear cut to fuel mercury mining operations in this area decades prior). The quick realization that boats and passengers were sitting ducks on the river below, initial thoughts went to whether we were in danger. Turns out, it was a man hunting Aoudad sheep on the Mexican side. Once we were able to locate him, he proudly lifted the animal he had shot, relieving our nerves and provoking applause, high fives, and cheers from below. Perhaps an example of our ingrained biases — fueled in part by political banter and social media — to be fearful first of our international neighbors to the south rather than to first presume we all prioritize putting food on the table and providing for our families.

The river itself was a beautiful example of a ribbon of water that has carved a Grand Canyon like landscape in a remote southern tip of Texas surrounded by gas and oil activity and notable and numerous border patrol check points which seemed randomly placed, but quite certainly are not.

Another day, we stopped along the river near the Boquillas border crossing (closed that day) and noticed a flat table-like rock on the US side decorated with small beaded metal wire artwork — roadrunners, cactus, scorpions, and such. A container nearby noted an “honor system” to deposit $5 or $10 depending on the item. We walked down to the river proper, a steep muddy embankment. A small plastic boat was hidden in the trees. Across the river were several people — some on horses, others sitting on the river bank waving and saying hello. We quickly realized they were the art vendors, but could not sit with their goods. So, they waved and kept shoppers honest by shouting “thank you” and presumably slipping over after dark to collect their earnings. What a dichotomy to the elaborate RVs, Harley Davidsons, and other vehicles that had parked at this scenic overlook and could come and go freely.

We left Big Bend and the Rio Grande with mixed emotions. A day or so later on the summit of Guadalupe Peak (the highest point in the state), we looked back over west Texas with a mix of awe and sadness. It is a region of spectacular beauty and bonafide west Texas skies and glorious sunsets. However, to envision a huge border wall running down the center of this pristine wild and scenic river — the only thing separating people with vastly different economic and social status — is difficult to grasp and even harder to rationalize.

Imagine instead if it was a river that united us? Broke down walls and barriers, and connected us only as rivers can?