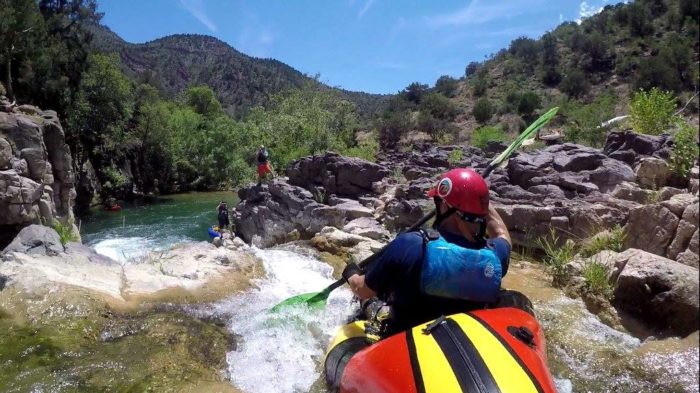 Fossil Creek may be the lowest-flow river preserved under the Wild and Scenic Rivers Act. Compared to most whitewater, its a trickle. The size of the river doesn’t match with its outsize place in the hearts of AZ paddlers, though. Fossil Creek is the only year-round whitewater destination in AZ, that’s not the Grand Canyon. Its also the only travertine river in the US that’s navigable by boat. There’s a few similar streams in Mexico, but in this country, Fossil is IT.

Our first trip down Fossil was legendary. While we had the guidebook description, we had no real beta, and no idea what to expect. None of us had even hiked down to Fossil Creek before. We set off down the river with no idea of what lay ahead. The paddler ahead would suddenly disappear down a chute and over an edge, and the person behind them had to hope things worked out. Stoke built as we ran rapid after rapid, each more beautiful than the last. It was perfect packrafting territory, with a creek too shallow for any other vessel, and hiking required to access. All of this in a beautiful blue-green stream, in the middle of some of the harshest country in the state. When it was over, we were all asking ourselves “this has been here the whole time?!” and planning an immediate repeat visit.

The next year, news emerged that the Coconino National Forest was rewriting the river management plan. Some of the things they had planned would have destroyed packrafting on the river, like closing certain key rapids to “waterplay,” and building bridges over others. I reached out to a friend who has been instrumental in expanding packraft access in Grand Canyon, and who happened to sit on the board of the American Packrafting Association. He helped me learn how NEPA processes worked, and I helped to draft the letter than the APA would eventually submit as a public comment. I and several packrafting friends attended multiple public meetings around the state. At one, I spoke with the ranger in charge of the Fossil Creek project, who told me that until we started showing up, “we had no idea people were paddling on Fossil Creek.” Our presence and engagement in the process turned the forest service around, and ensured that paddlers’ concerns will be taken into account when the river management plan is finally drafted.

Months later, I took my friend and APA board member on his first trip down Fossil Creek. It was the same beautiful, thrilling, amazing trip it always is, made more meaningful by the direct work we put in to keep it like it is, and preserve paddler access to this wild and scenic river.

Fossil turned out to be a training ground, in more sense than one. The winter of 2016-17 was a big whitewater year in Arizona, and the experience we’d built on Fossil Creek directly translated to our group starting to take on bigger, Class III and IV rivers. More importantly, though, we’ve also continued to be advocates for public lands. As the Trump administration began to assault wilderness in earnest, we took the lessons learned engaging in the management planning process for the Fossil Creek wild and scenic river, and began applying it in other contexts. I’ve gotten involved in fighting for monuments, for arctic refuges, and for the preservation of the wilderness act and NEPA as a result of the lessons learned on Fossil Creek. It is and will always be a favorite place.