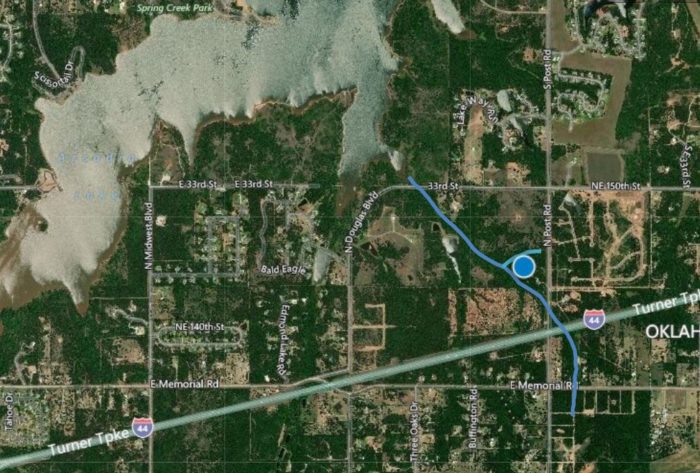 When I was growing up, I frequently went with my grandparents to a cabin we had on 20 acres outside of Oklahoma City (the location of our cabin is shown with a blue dot on the attached map). My grandparents had owned a cabin on a lake further away but sold it to buy this one closer to Oklahoma City during World War II because of gas rationing.

I’m an only child so there wasn’t much to do there, but from the ages of 7 to 25 I spent almost all of my time out there bushwhacking around a small stream that ran through our property just as my mother when she was young. She loved the cabin as much as I, but she missed being near a lake. There was a very small lake six miles away, but it was in a gated community so it was off-limits to everybody else unless we snuck in!

The stream near our cabin (shown in dark blue on the attached map) was barely deep enough to go over my feet, but the lush riparian area was a cool place to escape from the blazing 100* heat of Oklahoma summers since our cabin didn’t have any air conditioning. I would take a trail that went down to the stream at a point where there was a very small and short tributary that entered the larger stream. The water in that small tributary (shown in aqua on the attached map) was barely a trickle and doesn’t even show up as a stream on government maps. But if one hiked upstream a tough quarter of a mile from that point, one would be rewarded with watercress that grew wild there! Some people thought my grandfather was fibbing when he shared his wild watercress with others, but the conditions just happened to be perfect there for it to grow. I’m not crazy about many greens, but I loved eating that wild watercress with a little salt on it! In addition to the small tributary providing watercress, the larger stream was the source of high-quality drinking water at our cabin.

Sometimes I would just take off my shoes and walk around in the larger stream; feeling the water and red sand flow through my toes. I learned to stay away from some areas that tended to suck my feet down like quicksand. A short way upstream there was a small red rock cliff about 20 feet high where I carved my initials. Upon examination of the cliff, I saw where my mother had also carved in her name when she was just a teenager.

On days I felt adventurous, I would head upstream in search of the mouth of that stream. It was a hard hike climbing over obstacles such as fallen trees and barbed wire fences. As a result, I ended up only going about a half a mile to a road and never reached the mouth of that stream. My mother had also gone upstream to find its origins but didn’t reach it either. I had no idea how far the stream ran and was apprehensive about following the stream through other people’s property. Since then I have looked at maps of Oklahoma streams and saw that I had been just three-fourths of a mile from the stream’s origin when I stopped.

On some days, I would venture downstream to some random point where I would begin bushwhacking east through the trees and underlying thorns to see if I could make it back to our cabin. I would know I was on the right track when I found myself in an open area on the adjacent acreage where there was just a stone chimney and stone remanents of the outline of a cabin that had burned down decades before. Other times when I went downstream, I would turn west at some random point and go through the thorny trees until I came upon a large open area where a neighbor had grazing cattle. I would continue through until I reached a road that I followed back. Though I didn’t know it then, our stream would continue another mile until it reached the Deep Fork River which is one of the major rivers in Oklahoma.

When I was 25, I moved to Pennsylvania to continue my graduate studies. Soon after that, the U.S. Army Corps of Engineers (USACE) began condemning land just north of that road I reached after cutting through the land of grazing cattle. When I was 26, USACE built an 1800-acre reservoir – Lake Arcadia – for drinking water to nearby cities, for recreation, and for flood control. Our stream ended up going to one of the arms of that Lake.

I spent many hours of my youth hiking along less than a mile of this 2.7-mile stream. Though this wasn’t very far in distance, through this stream I developed a love for the outdoors and honed my instincts to be able to bushwhack through unknown areas without getting lost. My abhorrence of the trash that people dumped around this stream near the roads led me later to adopt a local watershed and work with others to clean it up such as during America Rivers’ National Rivers Cleanup every spring. Finally, my mother had a cabin near a lake like she always wanted since our stream feeds Lake Arcadia!